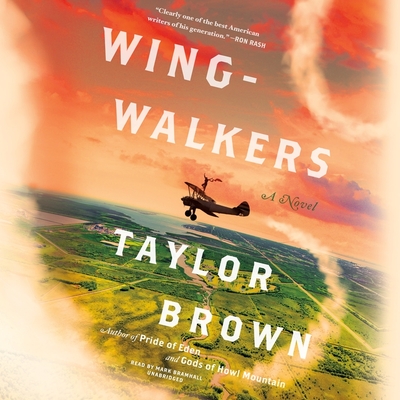 By Taylor Brown, Mark Bramhall (Read by)
$31.95
Email or call for price

They were over Georgia somewhere, another nameless hamlet whose dusty streets lay flocked and trembling with the pink handbills they'd rained from the sky that morning, the ones that announced the coming of DELLA THE DARING DEVILETTE, who would DEFY THE HEAVENS, shining like a DAYTIME STAR, a WING-WALKING WONDER borne upon the wings of CAPTAIN ZENO MARIGOLD, a DOUBLE ACE of the GREAT WAR, who had ELEVEN AERIAL VICTORIES over the TRENCHES OF FRANCE.

Wingwalkers is one-part epic adventure, one-part love story, and, as is the signature for critically-acclaimed author Taylor Brown, one large part American history. The novel braids the adventures of Della and Zeno Marigold, a vagabond couple that funds their journey to the west coast in the middle of the Great Depression by performing death-defying aerial stunts from town to town, together with the life of the author (and thwarted fighter pilot) William Faulkner, whom the couple ultimately inspires during a dramatic air show―with unexpected consequences for all.

Brown has taken a tantalizing tidbit from Faulkner's real life--an evening's chance encounter with two daredevils in New Orleans--and set it aloft in this fabulous novel. With scintillating prose and an action-packed plot, he has captured the true essence of a bygone era and shed a new light on the heart and motivations of one of America's greatest authors.