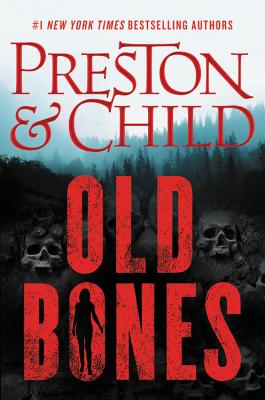 The #1 NYT bestselling authors Preston & Child bring the true story of the ill-fated Donner Party to new life in this thrilling novel of archaeology, history, murder, and suspense.
Nora Kelly, a young curator at the Santa Fe Institute of Archaeology, is approached by historian Clive Benton with a once-in-a-lifetime proposal: to lead a team in search of the so-called "Lost Camp" of the tragic Donner Party. This was a group of pioneers who earned a terrible place in American history when they became snow-bound in the California mountains in 1847, their fate unknown until the first skeletonized survivors stumbled out of the wilderness, raving about starvation, murder-and cannibalism.

Benton tells Kelly he has stumbled upon an amazing find: the long-sought diary of one of the victims, which has an enigmatic description of the Lost Camp. Nora agrees to lead an expedition to locate and excavate it-to reveal its long-buried secrets.

Once in the mountains, however, they learn that discovering the camp is only the first step in a mounting journey of fear. For as they uncover old bones, they expose the real truth of what happened, one that is far more shocking and bizarre than mere cannibalism. And when those ancient horrors lead to present-day violence on a grand scale, rookie FBI agent Corrie Swanson is assigned the case...only to find that her first investigation might very well be her last.

The thrillers of Douglas Preston and Lincoln Child "stand head and shoulders above their rivals" (Publishers Weekly). Preston and Child's Relic and The Cabinet of Curiosities were chosen by readers in a National Public Radio poll as being among the one hundred greatest thrillers ever written, and Relic was made into a number-one box office hit movie. They are coauthors of the famed Pendergast series and their recent novels include Verses for the Dead, City of Endless Night, The Obsidian Chamber, and Blue Labyrinth. In addition to his novels and nonfiction works (such as The Lost City of the Monkey God), Preston writes about archaeology for The New Yorker and National Geographic magazines. Lincoln Child is a Florida resident and former book editor who has published seven novels of his own, including such bestsellers as Full Wolf Moon and Deep Storm.
Readers can sign up for The Pendergast File, a monthly "strangely entertaining" newsletter from the authors, at their website, www.PrestonChild.com. The authors welcome visitors to their Facebook page, where they post regularly.

"Long-time readers of Preston and Child will love to see the beloved characters of Nora Kelly and Corrie Swanson take center stage in what is a terrific start to a new series. Their writing talent shines as this mix of history, exploration of nature and crime will without a doubt land on the top of the best-seller lists. Though some of the historical facts have been tweaked a bit for the story to work, a note to the reader from the authors at the end reveals what is true and what they made up, and is sure to lead to a surge in attention for non-fiction accounts of what really happened that horrible winter."—p.p1 {margin: 0.0px 0.0px 0.0px 0.0px; font: 12.0px 'Times New Roman'}Associated Press

"Old Bones exceeds expectations at every juncture, a thriller extraordinaire that turns history upside down in forming the basis of a riveting and relentless tale."—Providence Sunday Journal

"Preston & Child is one of those "names" on a book that make you want to set everything else aside in order to read what amazing words they've written [...] From the best writing team out there, you do not want to miss this book."—p.p1 {margin: 0.0px 0.0px 0.0px 0.0px; font: 12.0px 'Times New Roman'}Suspense Magazine

"From the thriller world's dynamic duo comes a new work of archeology, murder, and the Donner Party. This one should please longtime fans of Preston and Child, as well as new devotees drawn in by that ever-appealing set up of a past crime coming back to haunt the present."—CrimeReads

"Preston and Child have created a fine mix of fiction and historical fact. The story is peopled by complex and engaging characters with sometimes murky ambitions. . . The ending, which seems far-fetched, is definitely, disturbingly possible."—Booktrib

"Old Bones has it all: chills, thrills and a blend of history, along with archaeological expertise you can only get from a Preston & Child novel. I loved spending time with Nora Kelly and Corrie Swanson, and look forward to seeing them in future adventures. Longtime readers will be rewarded not only by this pairing but by some other surprises leading up to the conclusion of this exciting read."—Bookreporter

"Though the story of the Donner Party and its gruesome cannibalism has been told and retold, this masterful examination of the perplexing events offers a fresh take that carries meaning for contemporary readers. The launch of the Nora Kelly series is to be applauded."—p.p1 {margin: 0.0px 0.0px 0.0px 0.0px; line-height: 16.0px; font: 12.0px 'Times New Roman'; color: #000000}span.s1 {font-kerning: none}Washington Independent Review of Books

"Preston and Child's cast of characters spin off in their latest, starring Nora Kelly and ex-distinguished youth-turned-FBI agent Corrie Swanson. Kelly leads an expedition to excavate the Donner Party camp, while Swanson investigates a series of grave robberies. The longtime writing team yet again seamlessly merges science and suspense."—Newsweek