The Grapes of Math: How Life Reflects Numbers and Numbers Reflect Life (Paperback) 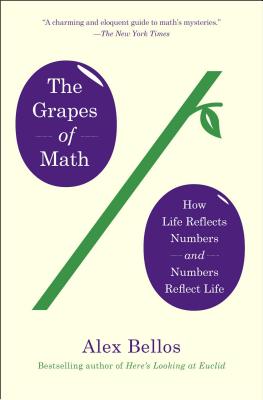 “A first-rate survey of the world of mathematics…Great reading for the intellectually curious,” (Kirkus Reviews) from the bestselling author of Here’s Looking at Euclid—a dazzling new book that turns even the most complex math into a brilliantly entertaining read.

From triangles, rotations, and power laws, to cones, curves, and the dreaded calculus, Alex Bellos takes you on a journey of mathematical discovery with his signature wit and limitless enthusiasm. He sifts through more than 30,000 survey submissions to uncover the world’s favorite number and meets a mathematician who looks for universes in his garage. He attends the World Mathematical Congress in India and visits the engineer who designed the first roller-coaster loop.

“Channeling the spirit of Martin Gardner…Bellos introduces fascinating characters, from the retired cab driver in Tucson whose hobby is factoring prime numbers, to swashbuckling astronomer Tycho Brahe, who lost his nose in a duel over a math formula. Through intriguing characters, lively prose, and thoroughly accessible mathematics, Bellos deftly shows readers why math is so important, and why it can be so much fun” (Publishers Weekly, starred review). Get hooked on math as Bellos delves deep into humankind’s turbulent relationship with numbers, revealing how they have shaped the world we live in.

Alex Bellos has a degree in Mathematics and Philosophy from Oxford University. Curator-in-residence at the Science Museum and the Guardian’s math blogger, he has worked in London and Rio de Janeiro, where he was the paper's unusually numerate foreign correspondent. In 2002 he wrote Futebol, a critically acclaimed book about Brazilian football, and in 2006 he ghostwrote Pelé's autobiography, which was a number one bestseller. Here’s Looking at Euclid was shortlisted for the BBC Samuel Johnson Prize and was a Sunday Times bestseller for more than four months.

"Another sparkling romp through the world of numbers, with the inimitable Alex Bellos as your friendly, informed, and crystal-clear guide. A brilliant successor to Here's Looking at Euclid."
— Ian Stewart, Professor of Mathematics, University of Warwick, and author of Visions of Infinity

"See, numbers don't have to be scary!"
— Evan Davis

"Alex Bellos’ The Grapes of Math is a delicious grab bag of mathematical miscellany that includes Benford’s law, fractals, exponentials and imaginary numbers, the Game of Life, among many other goodies, all presented in a most entertaining style. Both fun and instructive."
— John Allen Paulos is the author of several books including Innumeracy and A Mathematician Reads the Newspaper

"Think of the best storyteller you know and the coolest teacher you ever had, and now you’ve got some idea of what Alex Bellos is like. His Grapes of Math taught me something new on every page. Better yet, it made me laugh and want to tell someone what I’d just read. Math has never been so much fun."
— Steven Strogatz, professor of applied mathematics, Cornell University, and author, The Joy of x

“[A] first-rate survey of the world of mathematics by a British practitioner of the art.... Great reading for the intellectually curious.”
— Kirkus

“Channeling the spirit of Martin Gardner, the Guardian's math blogger Bellos (Here's Looking at Euclid) reveals—and revels in—the pleasures of mathematics, which he has dubbed ‘the most playful of all intellectual disciplines.’… Bellos introduces fascinating characters, from the retired cabdriver in Tucson whose hobby is factoring prime numbers, to swashbuckling astronomer Tycho Brahe, who lost his nose in a duel over a math formula. Through intriguing characters, lively prose, and thoroughly accessible mathematics, Bellos deftly shows readers why math is so important, and why it can be so much fun.”
— Publishers Weekly (starred)

“A charming and eloquent guide to math's mysteries…For its witty flourished, it’s never shallow. Bellos doesn’t shrink from delving into equations, which should delight aficionados who relish those kinds of details.”
— New York Times

“Bellos’ background as a storyteller makes Grapes of Math enjoyable whether you like math or not.”
— Metro

"The amiable Bellos is a people person, at heart, one who has compassion for those of us who feel a bit uncomfortable around a whole lot of numbers.”
— Boston Globe

“Bellos's voice is warm and witty, calming the fears of the math-averse and providing a concise primer on long-forgotten principles of algebra and geometry.”
— Shelf Awareness