Life on the Line: Football, Rage and Redemption (Hardcover) 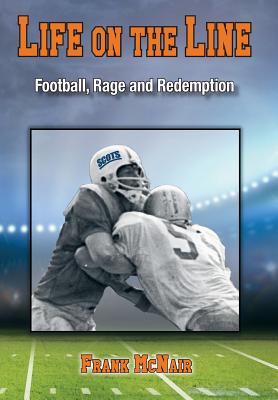 Life on the Line: Football, Rage and Redemption

It's late summer of 1965. School has just begun in Laurinburg, NC, and football season is right around the corner. Football is the secular religion in Laurinburg but the players seem to be atheists -- from High School down to grade school, the Fighting Scots are perennial also-rans.

In Mrs. McClellan's eighth-grade homeroom, Bart Wagram sizes up potential teammates for the coming season. Bart has flunked eighth grade and - while his teammates from last year went on to high school - Bart must play with a whole bunch of kids who were in seventh grade last year. Most of them look like sissies from where Bart sits.

Bart also flunked a grade in elementary school - learning disabilities were not easily identified in 1965. He is a fifteen year old man-boy up against the 12- and 13-year olds with whom he will be playing: thick, well-muscled, deep-voiced. He even has a hint of beard. Bart also has a preacher-father who is never home, parents who are divorced, a stepmother he hates, and a hole in his heart the size of California.

Franklin Gibson sits on the same row of seats as Bart in homeroom - just a couple of seats in front of Bart. Franklin is a football player, too - of a sort anyhow. He played little league football as a kid, but in seventh grade he weighed too much to be on the team. Franklin played with the kids from the mill village last year, and he got his ask kicked every day. Franklin's Daddy is a banker and his Mama is a worrier. Between them, neither of them knows a thing about football.

Franklin, too, has a hole in his heart. He's tired of all the cracks about his weight, tired of hearing about how he gets favored treatment because of his family, tired of constantly being under his Mama's thumb. He's tired of being afraid. And he is quickly growing tired of Bart Wagram's abuse.

Throw Bart and Franklin onto the same team, then mix in the exhaustion of two-a-day practices in late summer. Stir in a dose of rivalry, a generous portion of surging testosterone and the chance for Laurinburg to go undefeated for the first time in a generation. Combine with vicious hits, foul mouths and more dirty plays than you can count and you've got Life on the Line: Football Rage and Redemption.

This is a story about hatred and revenge. A tale of loss and longing. And - ultimately - a story about redemption and love and new beginnings.